I'm going to do a series of posts on taking functions and patterns that we all know and love and having a look to see if there are any ways we can improve them either through a faster implementation or by adding features. First up is the debounce function.

The debounce function is an extremely useful tool that can help throttle requests. It is different to throttle though as throttle will allow only one request per time period, debounce will not fire immediately and wait the specified time period before firing the request. If there is another request made before the end of the time period then we restart the count. This can be extremely useful for calling functions that often get called and are only needed to run once after all the changes have been made.

An example could be a sort function that is automatically fired every time an element is added. If you add 100 items in succession then the sort function will be run 100 times, but really you only want it run once after everything has been added. Debounce that sort function and your problem is solved (though keep in mind debounce works in a different event loop so if you have code requiring your data to be sorted you may want to rethink how to structure it). Another good example is a function based on scroll position, we really want to wait for the scrolling to be done and listening to scroll events will hit a function multiple time.


Above is a simplified version of the underscore.js debounce. It's fairly simple and works well, but can we improve it?


If we do add 100 items to a list then we will be clearing and setting a new timer 100 times, yet if these are all added before the end of the event cycle then there isn't much point resetting a setTimeout 100 times, one should be sufficient.

So now we need to update the debounce so that a timeout is not cleared. What we can do instead is save a timestamp every time we call debounce and only re-initialize a timeout if the last call has a timestamp less than our period in the past.

So I decided to just run a simple loop that called a function 100 times using the underscore.js debounce and we get a timeline something like this: 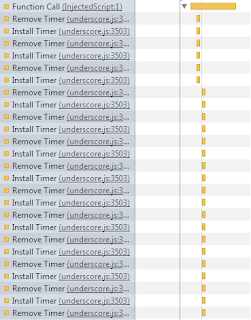 Then tried our new and improved debounce:

You can see it outperforms lodash and underscore mostly due to the fact it only has to install 1 timer rather than remove and install 100 timers. Also the debounce I used for the jsperf is slightly different to the one in the article - it was modified to have the same functionality as underscore and lodash (the ability to execute immediately) to make it a fair test. I have also made a pull request to underscore to change to this implementation and you can see the progress here: https://github.com/jashkenas/underscore/pull/1269

Looks like lodash has now updated it's debounce in the edge version (see comments) based on this post! Check out the JSPerf - it's now VERY fast.

You can get the code for debounce on my github at https://github.com/rhysbrettbowen/debounce

Posted by rhysbrettbowen at 8:10 AM
Email ThisBlogThis!Share to TwitterShare to FacebookShare to Pinterest